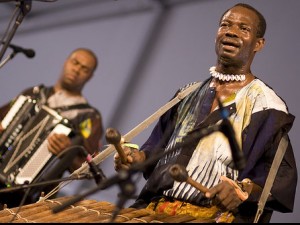 The leader of the Ensemble, Seguenon Kone, is a native of the Ivory Coast and juggles being a multi-instrumentalist, choreographer, and dancer in the Ivory Coast tradition. From touring the world with the National Dance Company of Ivory Coast in the 70s and 80s to touring the U.S. with Jimmy Buffett, Seguenon has brought West African traditions to many different audiences.

After moving to New Orleans in 2008, Kone put together an assemblage of musicians representing several of New Orleans' musical styles and fused his Ivory Coast rhythms and instrumentation to create Ensemble Fatien. This mixing of cultures resulted in a blend of West African folk songs, New Orleans jazz standards, and original material filtered through the prism of a traditional Ivory Coast aesthetic.

In addition to balafon and djembe, Seguenon plays doundoun, djembe, atougblan, shekere, ahoco, ark, castanets and flute. He is also the artistic director of Le Ballet Ivoire Spectacle, a West African drum and dance ensemble, as well as a drum & dance workshop instructor, acrobat and fire-eater.

WWOZ will broadcast Ensemble Fatien live from 2010 French Quarter Fest on the "Louis-Louis" Pavilion Stage in Woldenburg Park at 5:30 p.m., Friday, April 9. Seguenon Kone will also appear with Ivoire Spectacle at Jazz Fest 2010 on April 25 at the Jazz & Heritage Stage.