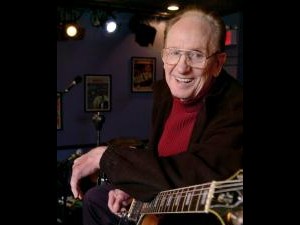 On August 13, one of the most influential men in the history of the electric guitar passed away at age 94: the inimitable Lester William Polsfuss, better known as Les Paul. His musical career, which began in the 1930s, didn't stop despite a semi-retirement in the late 1960s. In fact, he continued recording and performing well into his 90s, with a weekly gig at New York City's Iridium jazz club and winning a pair of Grammy awards in 2006 for his album Les Paul & Friends: American Made World Played.

Aside from his astonishing talent as a guitarist, which he maintained even after a 1948 accident that resulted in his arm being permanently fixed at a 90-degree angle, the Wisconsin-born entertainer was an avid tinkerer and inventor. He is credited with building one of the first solid-body electric guitars (later known as the ubiquitous Gibson Les Paul), as well as the first 8-track recording system. He also pioneered the use of overdubbing and several other recording techniques.

And when you're done browsing the clips below, go check out the feature film about Les Paul, Chasing Sound, available for free streaming online!