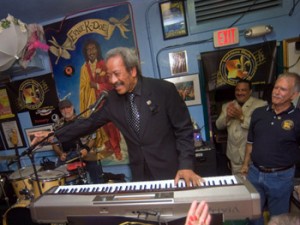 WWOZ congratulates three of the Crescent City's greatest musicians, Ernie K-Doe, Allen Toussaint, and Benny Spellman on their induction to the Louisiana Music Hall of Fame at the Mother-In-Law Lounge in New Orleans on August 2, 2009.

At the induction ceremony, Mr. Toussaint performed rousing versions of K-Doe/Toussaint hits "Mother In Law" and "A Certain Girl" for an extremely appreciative crowd. The late Ernie K-Doe was represented by his daughter, Miss Betty Fox, who now owns and operates the Mother-In-Law Lounge. Although Benny Spellman resides in Florida and could not attend due to health problems, he was presented his Hall of Fame plaque by New Orleans musician/entertainer Deacon John in person, video of which was simulcast at the club.

In honor of the event, we've gathered up a few images, links, and videos from around the Web so you can celebrate this trifecta of talent with us.

• The official poster for the August 2, 2009, induction ceremony at Mother-In-Law Lounge:

Thanks for the great posting Mike!

I wanted to make it to the Mother In Law Lounge for this event but was having back pains and could not make it. Your blog made me feel like I was there. Looks like it was a gas.

Thanks again for all the work you and your team put in to make the OZ Website as GREAT as it IS!