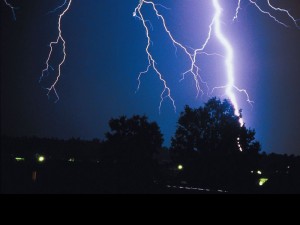 When WWOZ's live broadcast team — Damond Jacob and Tony Guillory — headed out to the beautiful San Juan Mountains in Colorado for the Telluride Jazz Festival in early June, natural disasters were the last thing on their minds.

Beginning with a lightning strike that turned our broadcast line into a smoking pile of unexpectedly dashed hopes, our crack team of engineers managed to use some pretty creative methods to get our live broadcast up and running.

Without a broadcast line in place, there was no way to relay the music to our listeners, so we had two choices: Pack up and go home, or come up with an alternative method of broadcasting on the fly.

Back at the station in New Orleans, Will Kirchheimer (one of our tech experts) received a mayday call from engineer Tony Guillory. "Tony's idea was to use the same server relay technology that handles the day-to-day WWOZ Internet feed, but invert the relationship between station and computer."

Using a laptop with a cellular wireless adapter in Telluride, Tony was able to shoot the signal halfway across the country to Will's laptop at the station, which passed the signal into the station's console via the laptop's headphone jack. The resulting broadcast was a little glitchy with some audio problems and dropouts.

Will recounts, "We had to put things together in a rush, so during the festival everything ran through my laptop at the station. Once we had time to sit back and plan it out a little better I set up an audio relay point on a virtual server, allowing any two points to connect more easily without the firewall problems we ran into the first day of the festival."

Upon his return to New Orleans, Tony set up a relay application at the station. That means we now have a couple layers of redundancy in place in case we should find ourselves in a situation where traditional broadcasting techniques just won't cut it, like in the case of a severe weather event.

So we're happy to report that we will broadcast the music of New Orleans to the universe come rain, shine, or poor levee engineering!

Topic tags:
Behind the scenes at WWOZ