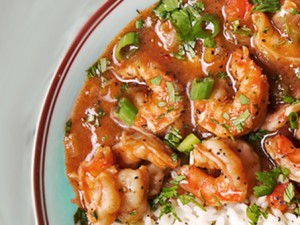 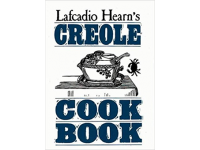 In the spirit of New Orleans' 300th anniversary, here's a different take on our monthly recipe: a pair of 19th-century Lenten recipes from Lafcadio Hearn's Creole Cookbook (1885). Hearn was an international travel writer who lived in New Orleans for a decade (1877-1887) and who helped create the popular perception of the city as culturally distinct from the rest of the US, having more in common with the Caribbean and Europe. In La Cuisine Creole: A Collection of Culinary Recipes (1885), Hearn published recipes he'd collected from chefs and home cooks around the city.

The two recipes below are for "maigre" or meatless dishes for Lent. They're probably better as reading material than actual cooking instructions. In the Shrimp Gombo (as Hearn spells it) recipe, he omits the fact that you need to make a roux before adding liquid to the pan; he adds that step at the end of the recipe. Also, his instruction to give the shrimp "only one boil up" is puzzling.

Maigre Oyster Gombo
Take 100 oysters with their juice, and one large onion; slice the onion into hot lard and fry it brown, adding when brown a tablespoonful of flour and red pepper. When thick enough pour in the oysters. Boil together for twenty minutes. Stir in a large spoonful of butter and one or two tablespoonfuls of filée, then take the soup from the fire and serve with rice.

Maigre Shrimp Gombo for Lent
Boil a pint of shrimps in a quart of water; give them only one boil up; then set them to drain and cool, reserving the water they were boiled in. Chop up three dozen okra pods, two onions, a pod of pepper, and a little parsley, and fry them brown in a little lard or butter; add to the okra the shrimps and strained water in which they were boiled. Let all boil for an hour, and season with salt and pepper to taste. When shrimp and crabs cannot be procured, half a pound of dry codfish, soaked an hour or two, and chopped fine, will do very well. All gombo should be thickened with a little flour--browned if preferred--and stirred in just before adding the water; then boil an hour.

If you're interested in reading more of La Cuisine Creole, there's a photo facsimile edition based on an original at Tulane University, reprinted by Pelican Publishing.