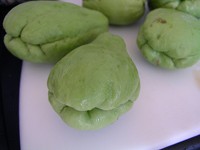 New Orleans is known as one of the best cities in the world for its food. People come from all over to eat at our restaurants and eateries.

If you are new to this area of the country and coming to your first Jazz Fest, then you might run into some foods that you not only have never had before, but might not have any idea what it is.

We’ll start with mirliton, which is also known as the chayote, alligator pear, mango squash and vegetable pear. Locally it is often stuffed with seafood.

A mufaletta is a round sandwich full of fine Italian meat and cheese, with an olive dressing, at the very least.

Boudin is a type of sausage where often the stuffing is pork, rice and other goodies.

Yaka mein has its roots in Asia but from there it leans more towards African American influence. Try any one or all, it’s part of the richness of being in Southeast Louisiana.