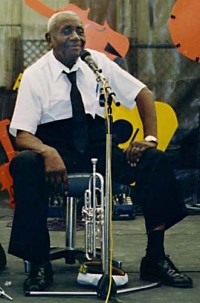 Ernest “Doc” Paulin was born June 22, 1907. He grew up in Wallace, Louisiana, in a Creole-French speaking family of musicians. His father played the accordion and his uncle, Edgar Peters, played the trombone. Paulin began playing music at seven years old for dances, balls and other events.

Paulin’s strict dress code and respect for the music set him apart from a younger generation just learning the music. “He embodied the spirit of the New Orleans jazz tradition in his manners and his trumpet playing and leadership,” said Michael White, a professor of African-American music at Xavier University and a clarinetist who started his own career in 1975 with Paulin’s band. “And for many decades . . . he trained dozens of musicians in his band.”

Saxophonist Donald Harrison, Jr., another jazz musician who got his start with Doc Paulin, noted that “he was the first person in New Orleans to pay me every time we played. He also made sure all the young musicians dressed in a respectable manner to the music. I have often thought how amazing it was for him to hire so many young musicians when he had so many sons that played music. His dedication to sharing and nurturing others reminded me of my parents.”

Doc Paulin’s band recorded for the Jazzology label in 1962 and was featured in Always for Pleasure, Les Blanc’s award-winning film about New Orleans culture. He last appeared at the New Orleans Jazz and Heritage Festival in 2004.

Many of his children — ten sons and three daughters — are musicians. At least six performed in his band and some of them perform together with their own traditional brass band, The Paulin Brothers Brass Band.