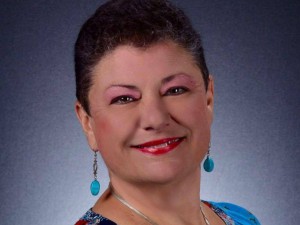 Here's the text of the official press release:

NEW ORLEANS….. The board of WWOZ radio today announced that it has hired 35-year public media veteran, Beth Arroyo Utterback, to lead the station as General Manager.  Utterback comes to WWOZ from her position as Executive Vice-President and Chief Operating Officer at WYES-TV (PBS).  She will assume her new position on June 1.

“Beth’s keen sense of understanding of our community and deep well of experience overseeing station programming, including producing successful series with New Orleans favorites such as the Marsalis family, Louis Armstrong, Preservation Hall, and Chefs Paul Prudhomme and John Besh, not to mention community partnerships with the National WWII Museum, the Ashé Cultural Arts Center and others, made it abundantly clear that she was the right choice for this role.  She will be a “Guardian of the Groove” in the truest possible way”, said Deborah Harkins, President of WWOZ’s board.

“WWOZ is a very special beacon of all that is true about New Orleans,” said Judge Sidney Cates, chair of the WWOZ hiring committee. “Our focus, of course, is music but it is also our mission to reflect and support the culture of New Orleans.  We are fortunate to have found someone who not only gets that but also lives and breathes it, with deep family roots in the city and a track record of being a successful emissary to the world.  Beth has brought her Emmy-winning eye to many topics that reflect who we are as a City.  She is held in high regard by local musicians including Irma Thomas, Deacon John, Leah Chase Kamata, James Andrews, Charmaine Neville and James Rivers.  Beth has led a diverse and talented staff and volunteer teams as well as 30 years of successful membership drives. We’re pleased to say that we’ve found the right person to spotlight our vibrant world-class local musical and cultural community.

Beth Arroyo Utterback responded: "I am thrilled to be entrusted with this incredible opportunity to lead WWOZ as we expand our mission to be the worldwide voice, archive, and flag-bearer of New Orleans culture and musical heritage. The world loves WWOZ, one of the top 5 radio stations in the country or, if you believed Andy Warhol as I do, the very best*.  I leave WYES in good hands after many wonderful years, and I can’t wait to immerse myself in the culture of WWOZ and its first class team.”

*WWOZ was named one of the top 5 stations in the country by Rolling Stone Magazine and was also called the greatest radio station in the world by Andy Warhol. Esquire magazine also named WWOZ Internet Radio Station of the Year.