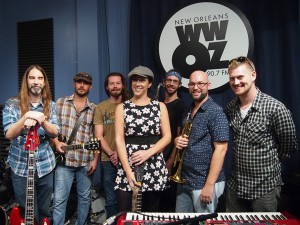 The Dana Abbot Band at WWOZ in October 2016

We are happy to announce the musicians featured on the Spring 2017 WWOZ Compilation CD, Back in the House.

Recorded entirely during our two 2016 pledge drives, and featuring artists like Herlin Riley, Khris Royal, and Irma Thomas playing with Flow Tribe, these tracks are some of our favorites from the many fantastic live performances that the WWOZ engineers recorded for your listening pleasure.

There's only one way to get your hands on this album and these tunes in your ears... Click To Pledge Today!

Here's the list of artists and tracks on Back in the House: