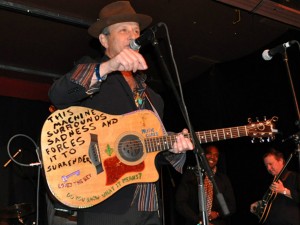 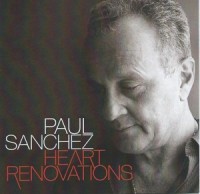 Native New Orleanian Paul Sanchez will be celebrating the release of his 14th album, Heart Renovations, this Saturday, August 20, with a release show at Pearl Wine Co. (3700 Orleans Ave). Heart Renovations is a timely sequel to his first solo album, 1992's Jet Black and Jealous.

"Jet Black and Jealous was a man in his twenties banging on his guitar and singing about finding and losing love. Heart Renovations is a man in his fifties, pausing to reflect on all of the same questions," says Sanchez.

Sanchez pulls from a surprising mix of genres to create a unique singer-songwriter album that combines music and storytelling. Sad tales, humor, pure entertainment, and hope are interwoven throughout twenty solo acoustic songs. Sanchez has a way with lyrics, and tracks like 'Happiness Would Be My Middle Name' have an understated brilliance that brings to mind shades of the underrecognized Blaze Foley. Humor abounds on 'Getting Drunk in Ireland,' a fine account of the many cities of the world in which it's fun to be inebriated in but "there's nothing like getting drunk in Ireland."

Sanchez began writing songs and playing his first professional shows in the French Quarter before he turned sixteen.  By the 1980s, he was an established part of the New Orleans rock scene, playing in The Backbeats along with Vance DeGeneres, another native New Orleanian. Off Beat Magazine awarded Paul Songwriter of the Year 2014 and he won three Best of The Beat Awards in 2010: Songwriter of The Year, Best Song of The Year, Best Folk/Rock Album for Stew Called New Orleans, his duet record with friend and collaborator John Boutte. In April of that same year Gambit Weekly awarded him Best Roots Rock Performer at The Big Easy Awards.

Primarily a songwriter, Sanchez has written songs for Darius Rucker of Hootie & the Blowfish, had a song in the country charts which was recorded by The Eli Young Band, and a song covered by Irma Thomas, the Soul Queen of New Orleans. Paul resides in the Treme neighborhood.

Heart Renovations was officially released July 31, available exclusively at the Louisiana Music Factory. It will also be available on CDBaby, iTunes, and Amazon in the coming weeks.

Paul Sanchez will be performing locally at the Pearl Wine Co. on Saturday, August 20, the Columns Hotel on September 6, and Chickie Wah Wah on September 9.