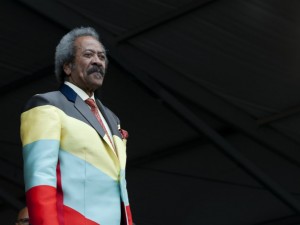 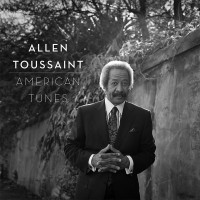 One word to sum up Allen Toussaint's final album: beauty.

Allen Toussaint, the patriarch of New Orleans R&B, recorded one last session before he passed away in November 2015. The 14-track deep American Tunes features solo piano recordings made at Toussaint's home studio as well as others made with guests like Jay Bellerose, Bill Frisell, Rhiannon Giddens, and Van Dyke Parks. Toussaint's beautiful style shines through on originals, and covers of songs by Professor Longhair, Duke Ellington, Fats Waller, Louis Moreau Gottschalk, Paul Simon, and more. It was released June 10 on Nonesuch Records, produced by Joe Henry.

A sweet, almost mournful 'Mardi Gras in New Orleans' is a far cry from Fess's version yet full of the richness and smooth elegance Toussaint was known for. Another loving cover invokes Longhair's tinkly justice to the 'Big Chief' refrain. Fess's 'Hey Little Girl' is also included. Rhiannon Giddens' vocals stand out on the deeply religious 'Come Sunday,' a song famously recorded by Duke Ellington and Mahalia Jackson, and a sultry 'Rocks in My Bed.'

The album ends with 'Southern Nights,' one of the few songs Toussaint wrote specifically for himself to perform. It was a regular part of his live performance repertoire in the last years of his life as he sprinkled in stories of his boyhood spent visiting relatives in the country. Toussaint sings just once on this record, and not till the final song of Paul Simon's 'American Tune;' a soulful and moving rendition. He starts out backed only by acoustic guitar, and not till two minutes in does he hit a chord on the piano. The depths of his sincerity on this track are felt strongly.

American Tunes is available on vinyl, CD, and mp3 from the Louisiana Music Factory, iTunes, and Amazon, and most of the finer record stores near you.