Dancing in the Streets: Social Aid and Pleasure Clubs of New Orleans exhibit at THNOC 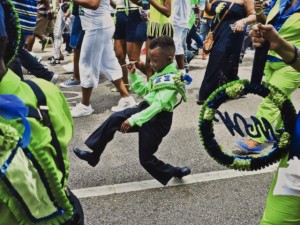 Dancing in the streets [Image courtesy of the Historic New Orleans Collection]
Tuesday, April 20, 2021 - 9:30am 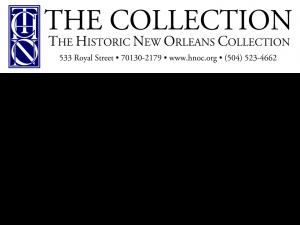 The sights and sounds of a defining local cultural practice, second line parades, come alive in “Dancing in the Streets: Social Aid and Pleasure Clubs of New Orleans,” on view at The Historic New Orleans Collection from February 25 to June 13, 2021.

Assembled in collaboration with more than 30 community partners and club members, the exhibition offers an intimate look at New Orleans street parades while also providing historical context of the tradition. Black mutual aid societies were founded in the 19th century to support African Americans and Afro-Creoles at a time when they were denied many social services, and second line parades are one of their most enduring legacies. Full of color, music, footwork, friends and neighbors, second line parades provide a weekly physical and symbolic gathering place for Black history and expression.

The exhibition is dedicated to the late Sylvester Francis of the Backstreet Cultural Museum and the late Ronald W. Lewis of the House of Dance and Feathers. Both longtime chroniclers of the second line scene, Francis and Lewis contributed to “Dancing in the Streets” by sharing images, artifacts and wisdom. Both men died within months of each other in 2020 as the exhibition was being built. Also essential to the exhibition is a partnership with the Neighborhood Story Project, which interviewed club members for inclusion in a companion audio guide to the show.

“This exhibition is different in a number of ways from projects we’ve done,” said exhibition co-curator Eric Seiferth. “In other exhibitions, we’re often talking about events that happened a long time ago just by nature of being a historically focused local museum. This exhibition does some of that, but it also gets into what’s happening right now as part of a living cultural practice.

“Social aid and pleasure clubs are a vital part of New Orleans culture, and we were fortunate to work alongside current practitioners to help us bring their Sunday tradition to our galleries. It was an honor to work with Sylvester Francis and Ronald W. Lewis, culture-bearers who set the standard for documenting the clubs that parade in New Orleans’ streets. Their work lives on in their books, their legacies, their communities and, we hope, in this exhibition.”

In the exhibition, displayed on the third level of THNOC’s Tricentennial Wing at 520 Royal Street in the French Quarter, parade regalia—from full suits to elaborate baskets and fans—gives viewers an up-close look at the unique artistry of second line parades. Images from a dozen contemporary photographers, including Judy Cooper, whose vision inspired the origin of this show, wrap around three gallery walls to re-create a second line from start to finish. Beyond the galleries, “Dancing in the Streets” will be supported with a rich array of online programming and resources at hnoc.org, including the 22nd annual Bill Russell Lecture, scheduled for April 28.

At the time of this exhibition’s opening, the city will have been empty of second line parades for nearly a year. Looking forward to the day everyone can hit the streets again, The Historic New Orleans Collection presents “Dancing in the Streets” as a love letter to the social aid and pleasure club community.